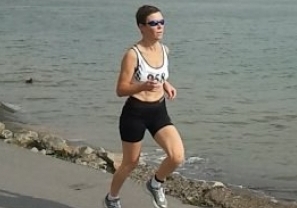 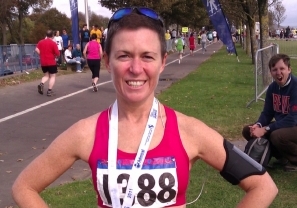 I was fit, but I didn’t run. Fit people run don’t they? So I tried running. My Achilles decided to tell me it thought this was a bad idea. After ongoing problems several months later I decided it was time to get some advice. I first discovered Karen Weir as @runwithkaren on Twitter. We arranged to meet for her to look at my technique in Richmond Park. In the meantime, I sent Karen an email with a long list of questions I had about running.

Karen had me running back and forth at different speeds, so that she could assess me. She introduced changes to my foot pick up and the position of my arms. Throughout the session Karen encouraged me and gave lots of positive feedback. Karen is a natural at understanding her clients’ learning styles. She used key words that instantly began to improve my running technique. In my first lesson I learned about ‘pick your foot out of the bucket’ and ‘squeeze the credit card’. They may sound strange, but as soon as I think of those words, I know that I am running with better technique. I even had my running style praised by another competitor during a 10km race!

During my session with Karen, she did indeed answer all those questions in my email. I understand foot strike, easy runs, tempo runs and cadence a lot better now and I have had no repeat of the Achilles problems! I recently returned to Karen for another session, to check that my technique really had improved. She was delighted with my progress. My inner-child beamed! So Karen took me a stage further and now my key words are ‘squeeze and lean’.

Since my first lesson with Karen, I have introduced speed work and hill repeats into my sessions and discovered a love for off-road running. I came 106 out of 442 women in an off road 10km and have used my improved running to good effect in an aquathlon (swim and run) and in my first ever triathlon. I have entered some muddy 10km’s this winter, including my first ‘international’ in Ireland. My next goal… maybe a half marathon???

I wouldn’t be running if it wasn’t for Karen Weir. Instead of ‘can’t run, won’t run’, I am definitely now ‘can run, want to run’.