Rory Murphy – I am a sub 4 hour marathon runner! 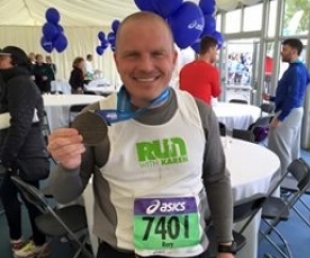 It was late 2011 and I was fed up with running. I started running seriously in 2009 and quickly progressed from 5k to 10k to half marathon, and ran some reasonable times. I then stalled, and went backwards for 2 years. I wasn’t getting any faster – in fact I was considerably slower, and I wasn’t enjoying my running. Enter Karen Weir.

I met Karen in summer 2011 when a running group at work invited her in for some (informative and very helpful) seminars on running, so when I decided over the winter that I needed a more structured approach to my running she was an obvious choice. We connected via phone, discussed what I wanted to achieve and started putting a plan together.

Today marks the end of my first 12 months of working with Karen – and the results on their own speak for themselves. I’ve set PBs in 5k, 10k (twice) and half marathon and not by a second or two either – 4 minutes for 10k and a whopping 9 minutes off my half marathon PB (set just today!). I’m so much faster in every facet of my running – especially as my PBs were all set in 2009, so vs what I was running in 2011 I’ve improved by 7 mins for 10k and around 15 mins for half marathon.

I love working with Karen – she sets me a 4 week training plan to follow and then we talk regularly on my progress, how I’m feeling and if I have any issues. I know that I can talk to her if have any questions and I’ll get expert advice. My training plans are great – varied enough to keep me interested, structured enough to keep me disciplined and tailored to what my next target is. I’ve also joined a couple of group runs with the rest of her runners in Richmond Park, which have been extremely good fun with a very friendly bunch of fellow runners

If I’m honest though – the single biggest change I have seen since working with Karen is not my times, it’s the fact that I ENJOY my running a lot more. I look forward to my training runs as I know that they have a purpose and have been designed to help me, and my race runs are much more comfortable and enjoyable as a result. And that, I think, is the best compliment I can give a running coach. 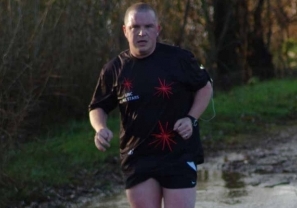 rom my last update and I’m slightly amazed to be able to describe myself as a marathon runner! The seeds of the idea were sown in the aftermath of my Wokingham half PB – previous halfs had left me exhausted, after pushing to the limit to complete – this had always led me to write off a full marathon.
Wokingham was different as I was very comfortable running and had no issues with recovery – thanks to Karen’s coaching….maybe I could run 26.2 miles after all!! I decided to go for it, signed up to a charity place for London and then put it to one side until winter.

Come December and it was time to focus – and I can honestly say I would never have got to the start-line, much less completed it, without the superb support I received from Karen. The tailored training plans, the Balmoral training weekend (which I thoroughly recommend), the continual encouragement via phone and face to face, the group runs and the marathon prep seminar……all instilled in me the confidence that I could run twice as far as I’d ever done. Marathons are as much metal tests than physical, and Karen does a great job in building your mental strength as much as your physical ability.

I finished London in a credible 4:42, and have already signed up to my 2015 marathon, anxious to beat that time. Thoroughly looking forward to another winter of running with Karen!

A year on from my last update and I am now a double marathon runner! After taking a break for a few months post London (due to injury) I started working with Karen again in the autumn with the goal being a sub 4 hour marathon in Manchester

As always the support and coaching from Karen was first class – a varied structured plan, plenty of advice and help and the real peace of mind that comes with knowing you’re on the right path. Added to that this time round was a change of diet brought on by Karen’s advice. Cutting sugar from my diet led to me shedding over 30 pounds and a leaner fitter runner appearing in its place!

The results have been astounding – a strong spring saw new PBs for 5k and half marathon, a perfect training program put me in peak shape and it all culminated with a Manchester marathon time of 3:56….sub 4hour tastic!

wasn’t finished there as I finally felt able to go all out at 5k and have just obliterated my 5k parkrun PB by 83 seconds, dropping it to 21:12 and entering realms I never thought possible. Next stop – my pesky 10k PB which is 2 years old……but with Karen’s coaching it should be a doddle.