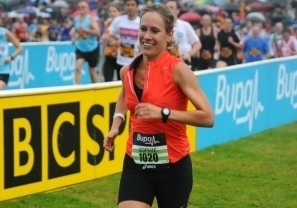 I began working with Sophie in the build up to the Virgin London Marathon in 2011. The signs were good, Sophie was sticking to the training and all her preparation races were spot on target times. So a sub-4 hour marathon at London was on the cards. However, what we hadn’t quite planned for was the balmy temperatures that greeted us on race morning.

Sophie started her marathon feeling positive, sticking to her pacing and nutrition strategy and went through 22 miles in 3 hours 25, so it was all looking good. However at 23 miles it all then went a bit pear shaped as Sophie passed out and spent the next 2 hours being looked after by St John’s Ambulance. For her own thoughts on the experience check out Sophie’s blog:  http://www.realbuzz.com/blogs/u/Sophie_Raworth/sophie-raworth-s-blog/

But with a true heroic effort and a demonstration of the committment to the charity she was fundraising for – Cancer Research, Sophie did finish the Virgin London Marathon but the 6.22 was not quite the time she was hoping for or had the capability of acheiveing.

6 months on and Sophie has been back to her running, having just completed the Great North Run in a magnificant 1 hour 51. Finally a chance to do justice to her training, commitment and running ability. She admits she’s addicted to running now! The Royal Parks Half is next and then we’ll be revisiting her marathon goal in 2012. A sub 4 hour London Marathon. Watch this space……. 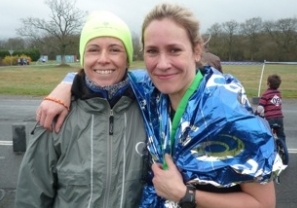 There is no stopping Sophie; with a renewed vigour in her running and obsessive desire to get faster, Sophie has just smashed her half marathon PB with a 1.48 at the Royal Parks Half. And she’s now asking me how much faster can she go? Next goal, sub 1.45!

Marathon Upate: At the 2012 Virgin London Marathon, Sophie achieved her target of running sub 4 hours with a 3.57 and walked away at the end looking very fresh. Once again we are working together for the 2013 London Marathon and definitely targeting a new PB.